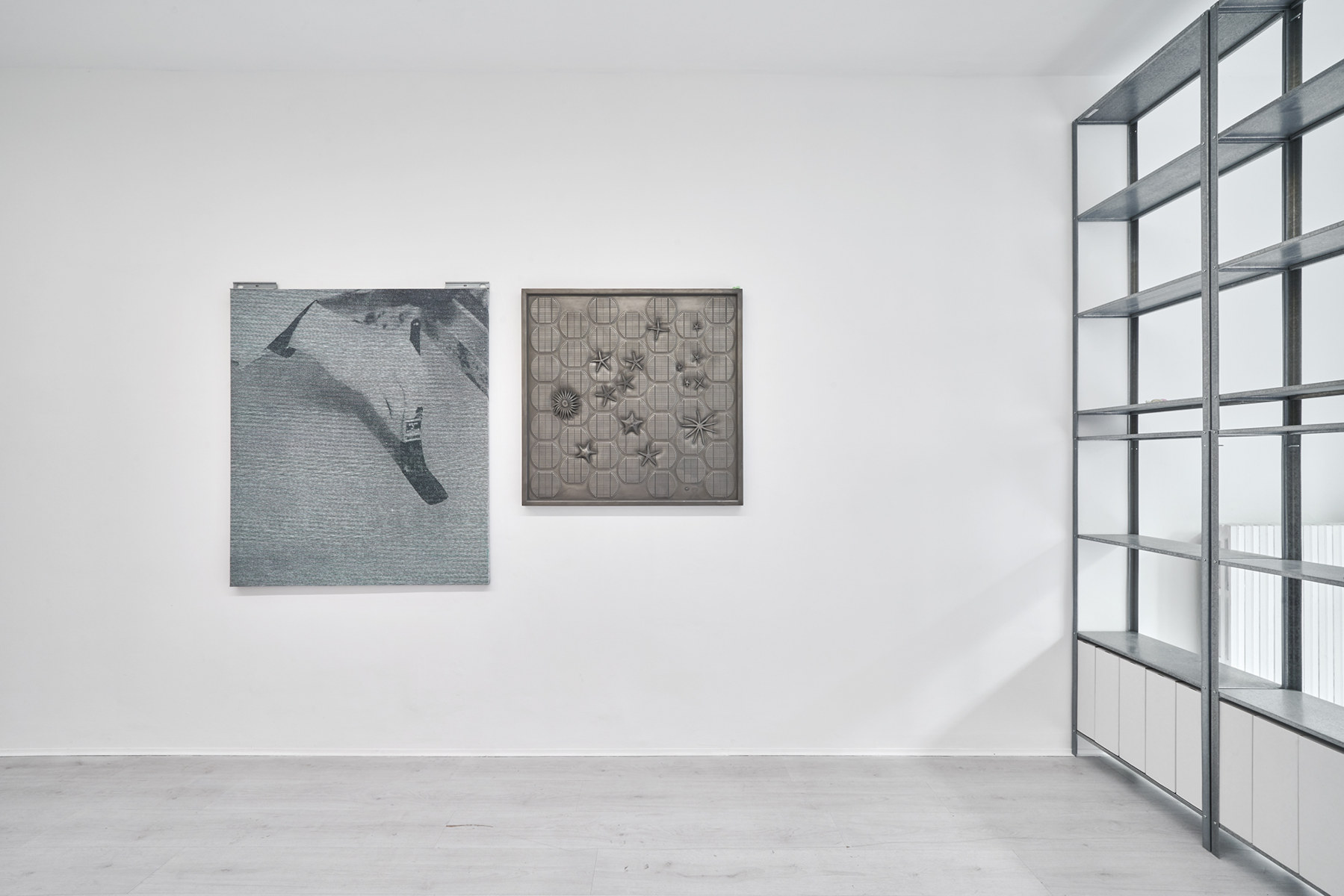 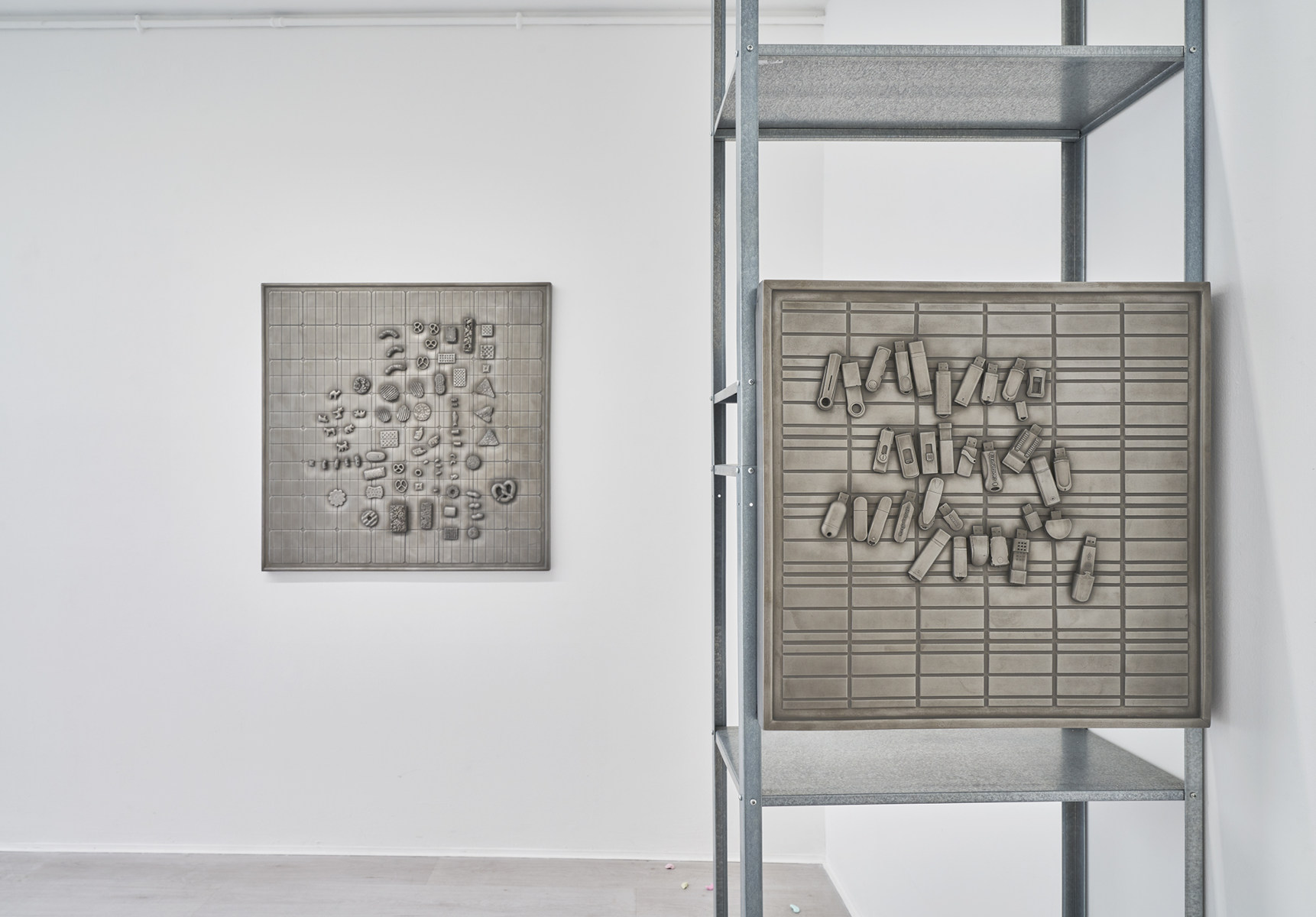 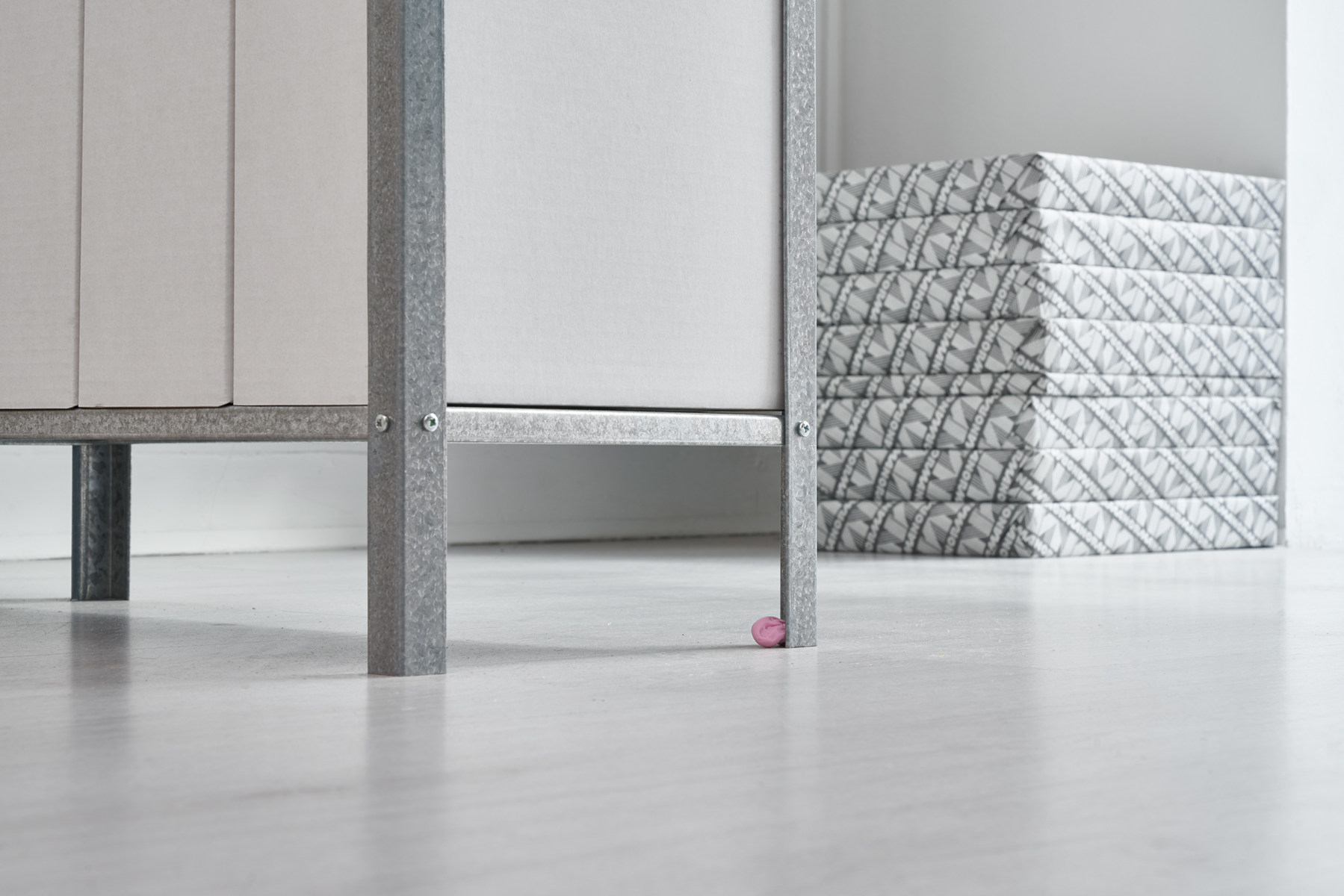 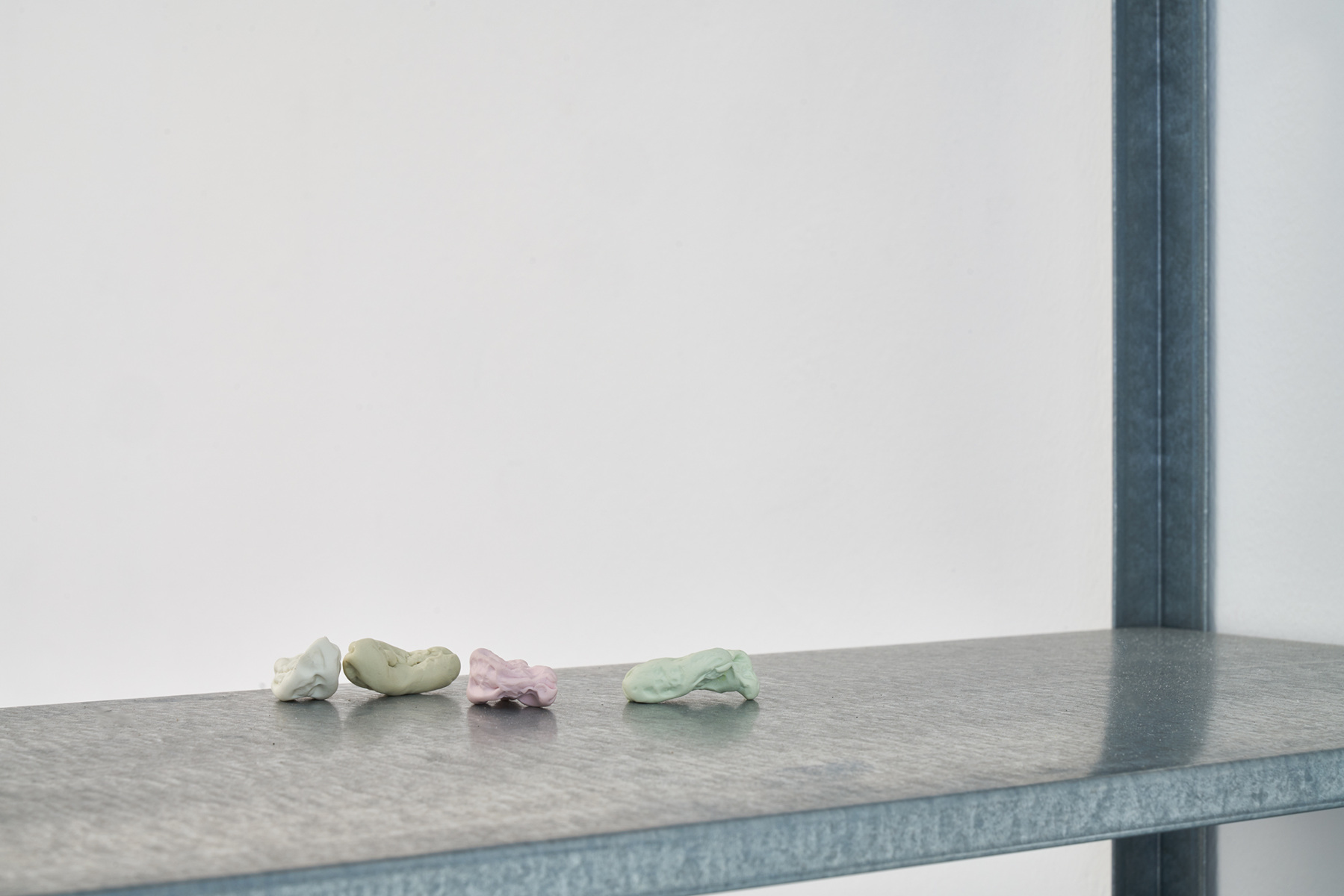 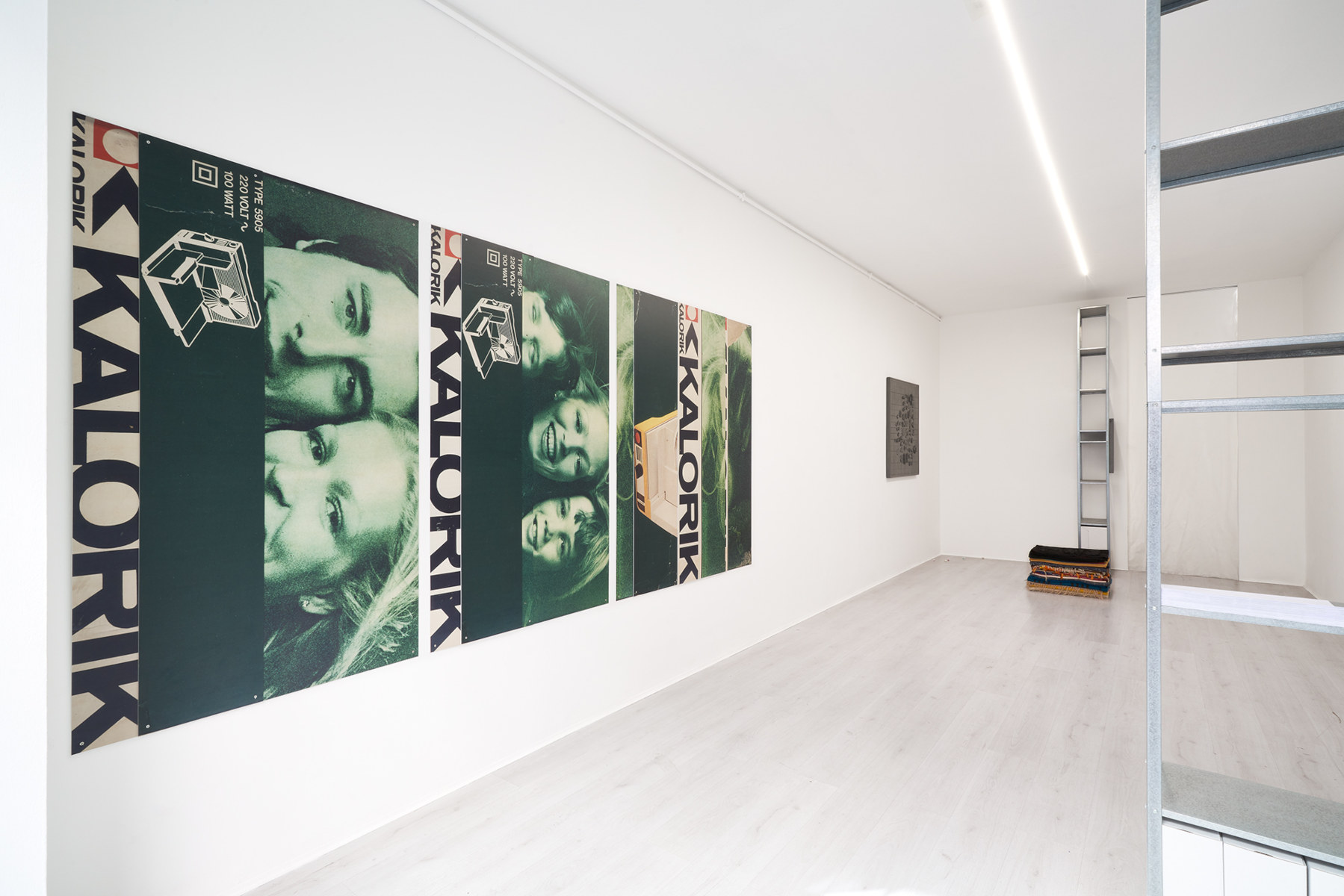 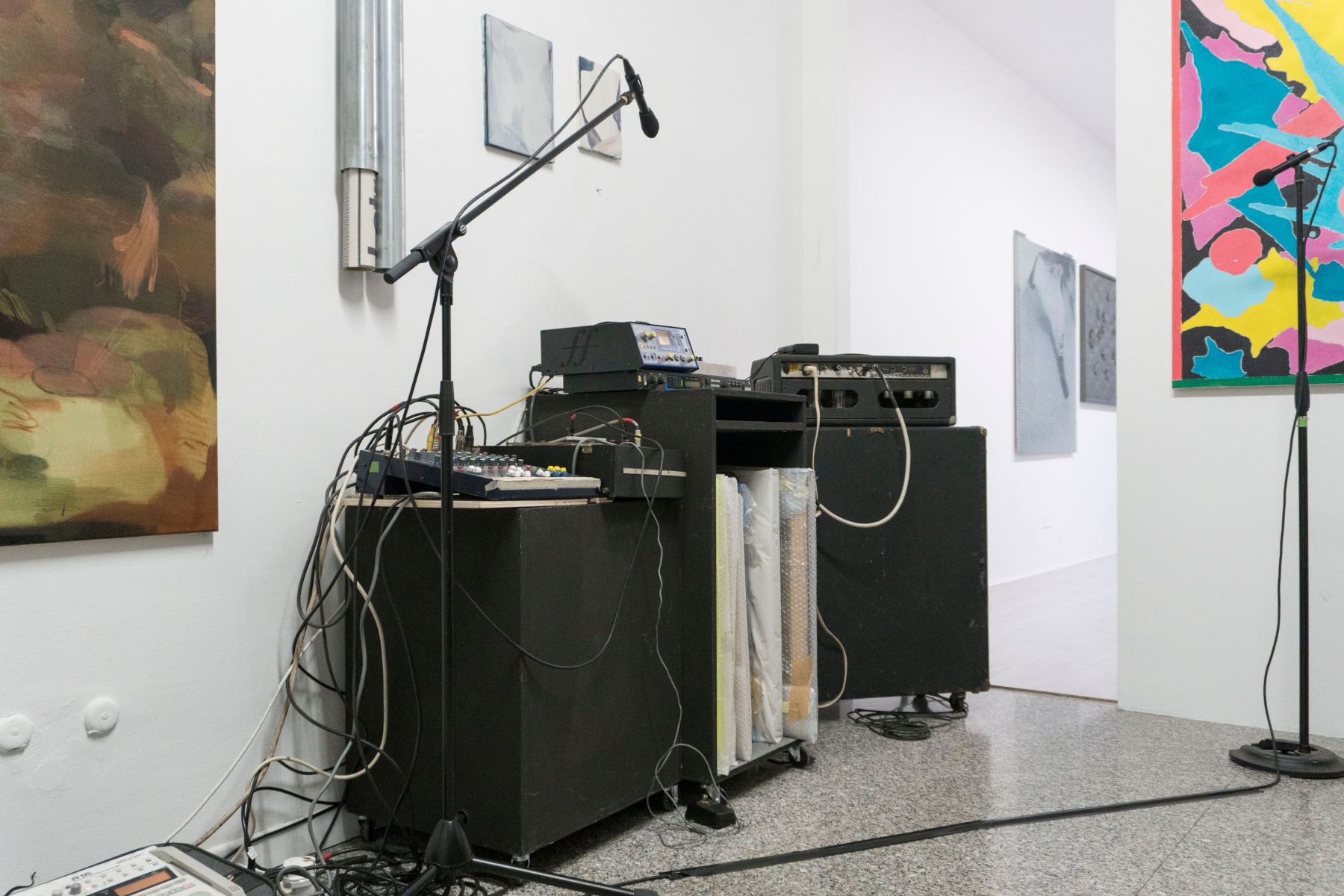 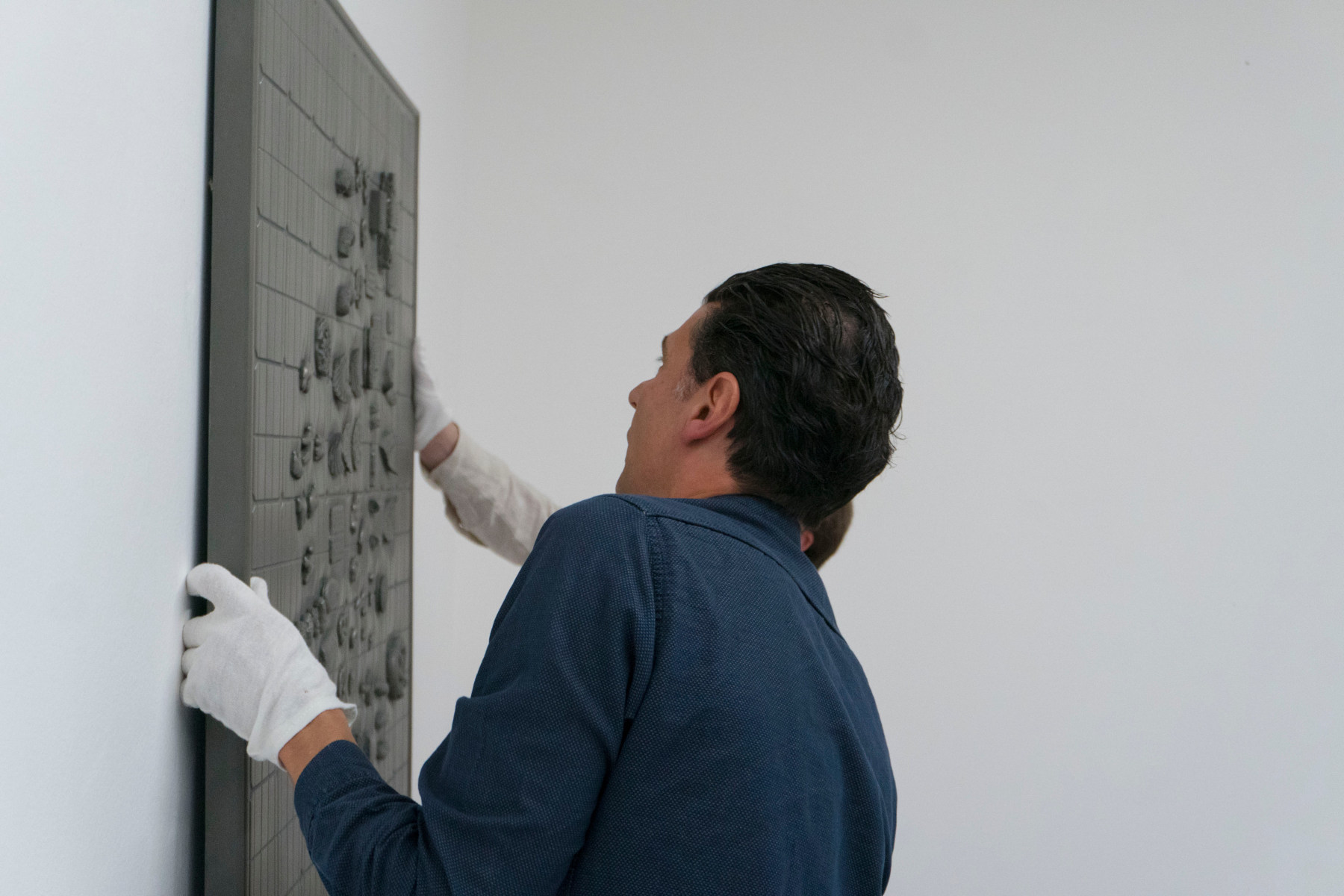 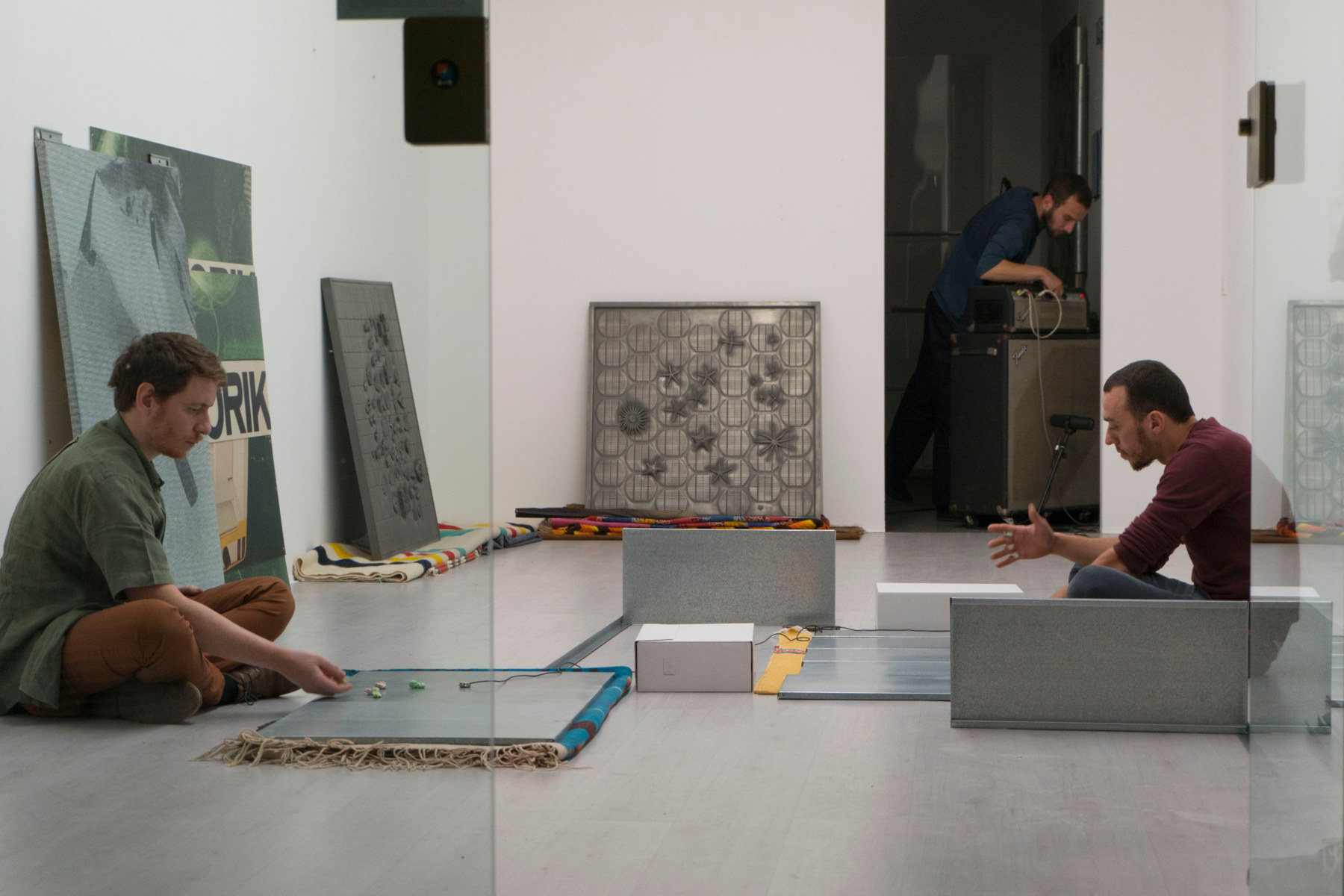 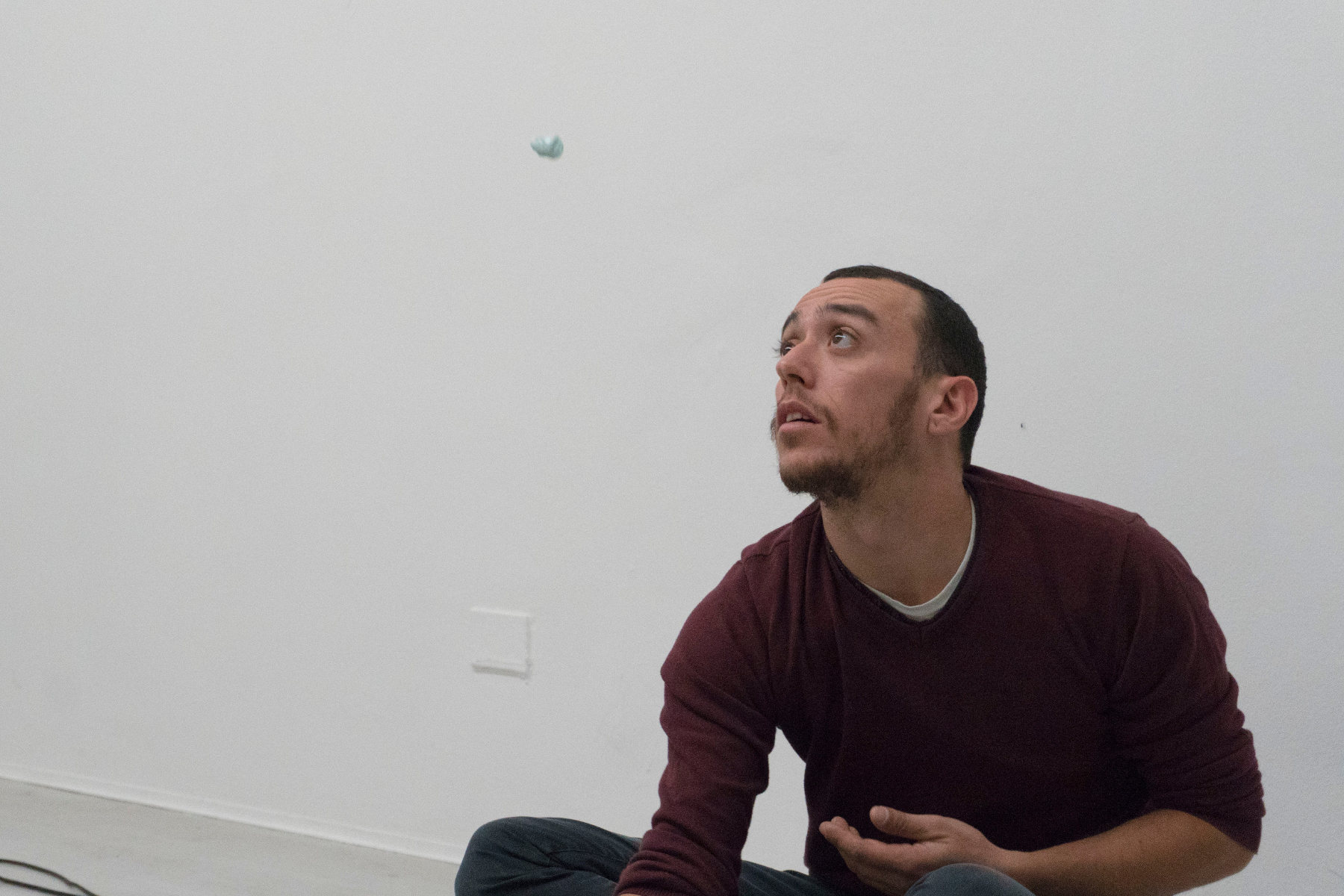 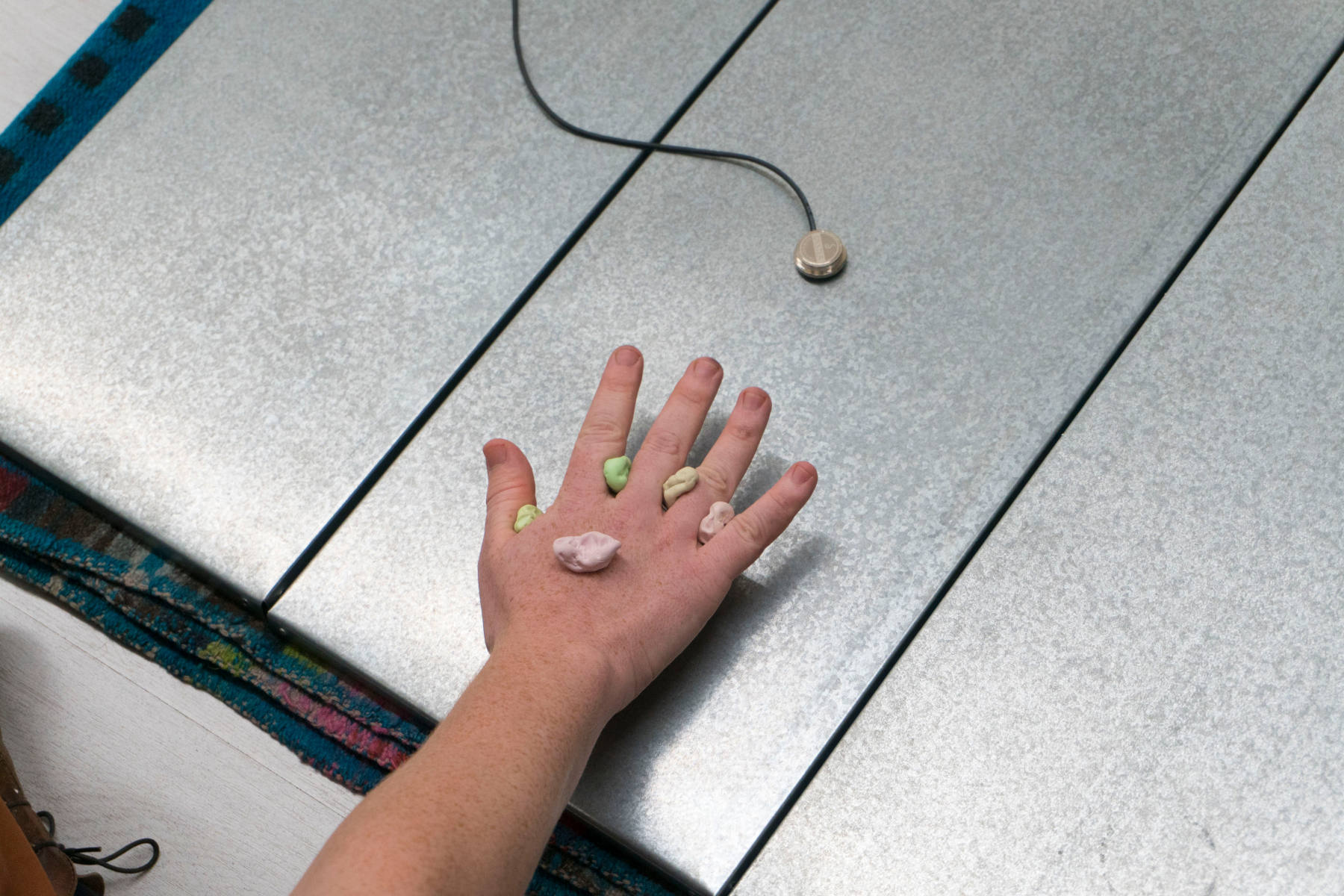 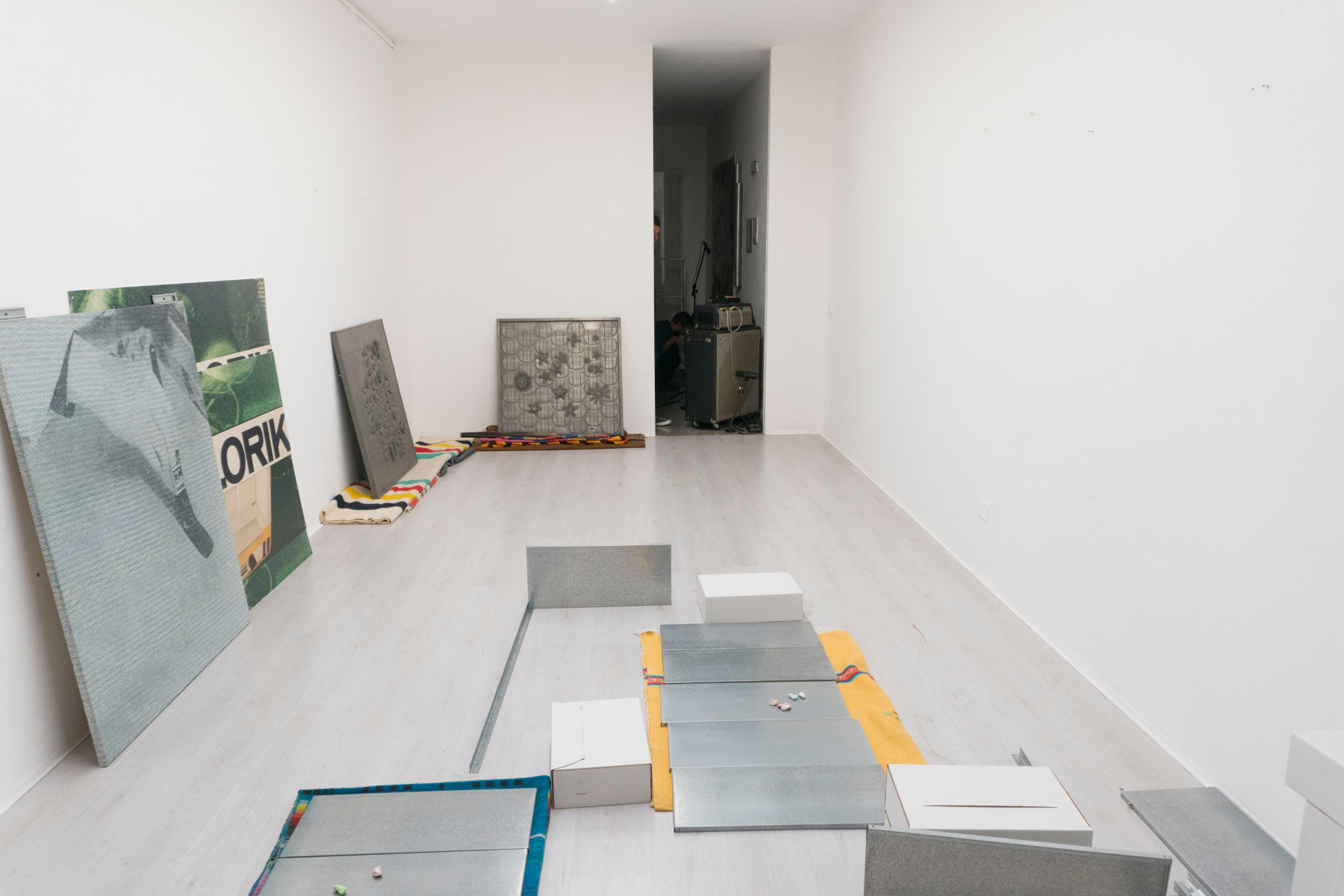 A+B contemporary art is pleased to announce The Raw Morphology, a group exhibition featuring works by Davide Bertocchi, Manor Grunewald and Michael Jones McKean. The show, curated by Gabriele Tosi, will end in September with a performance by Bertocchi.
The project started from the idea of a possible dialogue between Grunewald and McKean on the topic that even a still object or a printed image is indeed a process, but too slow to be observed during a satisfactory time frame. Starting from here and quoting different display techniques in the meanwhile, the exhibition-making suggested the opportunity to include some randomness, therefore a performance has been commissioned to Bertocchi.
The Italian artist is also present in the show with a family of very small sculptures and with a mimetical intervention outside the gallery. In the space, Grunewald exhibits a system of works spanning from installation to painting and printing and including new pieces, while McKean presents a series of wall-sculptures and a new object exhibited in Brescia for the first time.
From a wide point of view, the exhibition is somehow entangled with a chance offered by contemporaneity and after the globalization, namely the necessity to embrace the whole world and the whole time as a single object. This exercise appears to be less utopian aesthetically speaking rather than contextually and narratively. This fact alone can be conceived as a breakdown into the order of knowledge.
That’s probably why both in the exhibition and in the artworks displayed, each object is unstable. Image refuse to be only a document while objects refuse to be just relics. Everything is looking for some true or false friend instead. Like pilgrims, traveling to time and assisting to their own origins such as their own endings, things are now the self-statements or their infinite possibilities, a raw morphology of things to come.

A performance by Davide Bertocchi

Many of Bertocchi artworks and projects take the form of an open platform in which other artists are invited to play and to contribute.

ASTRAGALI is conceived as a two hours lasting situation, acted by Marco Gobbi and Davide Mancini Zanchini, featuring a sound-based live intervention by Francesco Fonassi and including artworks by Manor Grunewald, Michael Jones McKean and by Bertocchi himself.

The Raw Morphology is an exhibition curated by Gabriele Tosi focusing stillness as a movement acting in a different spatial and time frame. In this context, the performance can be read as a play about the origin and the destiny of the many shapes of this world. A contemporary novel in which artists throw a dice playing the world and its noise as their own object to manipulate.

From a more technical point of view, the performance is also a reconfiguration of the exhibition in time and space orchestrated by a non contemplative action. In this new frame, previously exhibited artworks appear as simple objects with a renewed functionality.

Astragali is an ancient game, closely connected with modern dice game. Originally using sheep bones as object to be thrown, Bertocchi make use of his own series Conversation Pieces (small fimo sculptures modeled as chewing gum) as a “new” form of knucklebones.